Posted on February 21, 2014 by vixenswithconvictions — 4 Comments

Of all of the deaths in the so called “troubles”, the following has haunted me since I read the details.  This is Anne Ogilby, a beautiful 31 year old, single mother of four. 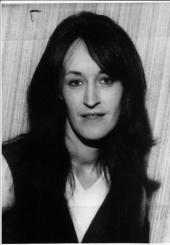 She’s dead now.  Beaten to death.  By women. Over and over and over, with her six year old daughter in earshot.  The image of Anne Ogilbys final moments, and the fact that she met her brutal death at the hands of other women is likely why it is indelibly marked in my mind, unrestful and uneasy.  Her youngest child was just 8 weeks old.  We are grateful to host todays blog writer Jeanne Griffin, who describes below the circumstances involved in the murder of Anne.  Before we get to her post, the following poem, written by Linda Carson, is both haunting and beautiful at the same time.  She captures wonderfully an image of many women in Belfast at that time, dead eyes, trapped and suffocating in the area in which they lived, and in a cycle of violence, and prisons, and hopelessness.  And the waste and revulsion and anguish at Anne Ogilby’s demise, and the way in which her murder was carried out.  But she does much more than that.  She also captures the other side of some women in Northern Ireland who involved themselves in paramilitary groups – callous, wreckless, and de-senstised to the point where they could murder in cold blood.  It’s an important description, and one which is not often explored when looking at women’s role during the conflict.  Ed.

Broken Belfast Street.
Grey and Dingy.
Sealed off with barbed wire
To stop murderous neighbours
You lived in that trap
Suffocating.
He was in another prison
Called Long Kesh.

Sleepwalking woman.
You shuttlecocked
From jail to jail
On dutiful visits.
Your eyes were old
They did not match
That bright hair
That made men watch you
Avidly:

You met him –
Another starved somnambulist.
Two living corpses clung together.
Thawed each other for a while.
But they found out.
They dragged you to their playroom.
Now you lie limp.
Face down.
Dumped in a ditch.
Routine policemen come
Accustomed, stoney-faced
‘Turn her over, see the damage’.

O, poor adventuress –
In the name of virtue,
They cut your flaxen hair.
Defiled your lovely breasts.
Before degutting you.

On 29 July 1974, the body of a young dark-haired woman was accidentally discovered in a ditch in Belfast’s Stockman’s Lane near the MI motorway by maintenance men.  The RUC were immediately called to the scene where they examined and photographed the dead woman who had been lying on her back partly submerged in 18 inches of stagnant water. Her bruised and blackened face was visible and her arms outstretched as if in mute supplication.

A CID team headed by Detective Alan Simpson quickly identified the dead woman as 31-year-old Anne Ogilby. As the details of her death emerged, it caused widespread shock and revulsion throughout Northern Ireland, despite people having become accustomed to daily bombings and shootings.  Anne Ogilby had been beaten to death by two teenaged girls from the Sandy Row women’s UDA unit. Her “crime” had been to have an affair with a married UDA man and make disparaging remarks about his wife not sending him food parcels after he’d been interned in the Maze.

Anne Ogilby, a Protestant originally from Sion Mills, County Tyrone, had transferred to south Belfast in 1968 where she took up a transient lifestyle. She was the single mother of a daughter, Sharleen, born after an affair with a married British soldier who had abandoned her and the child. By the time she was introduced to William Young in August 1972, she had also given birth to two more children by different fathers but the boys had been put up for adoption after their birth.

She fell deeply in love with Young, a married UDA member.  He claimed however that his marriage had broken up and was waiting for the divorce to come through.  He often brought her to a UDA club that had been set up in a disused bakery in Sandy Row’s Hunter Street, until he was interned in 1973. She enjoyed the company of the club’s patrons and the camaraderie of fellow loyalists against the IRA.  Young’s wife was a member of the Sandy Row women’s UDA unit; led by Elizabeth “Lily” Douglas, a fearsome woman  who revered power above else in life and who had a criminal record dating back over ten years. Lily’s 19-year old daughter, Elizabeth was also a member of the unit.

When Young told Anne during a visit that his wife was not sending him food parcels although the Loyalist Prisoner’s Association had provided her with the money, Anne made the mistake of repeating this within earshot of the UDA women. They were already antagonistic towards her due to her affair with Young and they also resented her for daring to frequent pubs and clubs on her own which they regarded as a cultural infraction that brought shame upon their community.  Young’s wife was also able to prove she had been sending the food parcels. On 23 July 1974 , eight weeks after Anne gave birth to a baby, Derek –  fathered by Young, she was taken into “custody” by Lily and several others from her unit and tried in a kangaroo court, held at the disused bakery –  which also served as a UDA ‘Romper Room.’ A total of eight women and two men presided over her “trial” and she was informed that if found guilty she’d be “rompered”. Anne was grilled over her affair with Young and calumnious remark sabout the food parcels. At the end of the interrogation, the men ordered her release.

The UDA women however wanted blood. As soon as Anne boarded a bus at Glengall Street they dragged her off into a waiting car for a further grilling. The driver had already notified the RUC and within minutes Anne and the eight UDA women were taken to RUC Queen Street station for questioning. She was, however,  too frightened to reveal why they had forced her into a car. Anne and the others were released and she returned to the YWCA hostel where she lived at the time with her six-year old daughter on  the Malone Road. The following day Lily told her Heavy Squad girls (the women who meted out beatings) that Anne was a troublemaker who had to die. The women quickly made plans to facilitate her murder.

The women had knowledge that Anne and Sharleen had an appointment with the Social Services office in Shaftesbury Square and both she and her daughter were kidnapped and bundled into a van driven by UDA man Albert Bumper Graham. They were both taken to the UDA club inside the old bakery which was already prepared  to serve its other grisly purpose as a Romper Room. Sharleen was given money  to buy sweets and Anne was dragged upstairs by the waiting UDA women. Two members of Lily’s ‘Heavy Squad’, teenagers Henrietta Cowan (aged 17) and Christine Smith (aged 16) forced Anne onto a bench and placed a hood over her head. The girls then proceeded to punch her in the face, the blows knocking her to the ground . She was subsequently kicked in the  face, head and stomach, and beaten with sticks . When Cowan and Smith began dropping bricks onto Anne’s head , Albert Graham and Josephine Brown (another Heavy Squad girl) realised that things had gone too far and remonstrated with the girls to discontinue the attack. Cowan and Smith did pause briefly to smoke cigarettes.

Six year old Sharleen had returned from the shops and was banging on the outside door crying for her mummy. Although Anne had by this stage sustained severe head injuries, Sharleen heard her screaming and pleading for mercy. Her pleas were futile as Cowan and Smith clearly enjoyed their roles as Lily Douglas’s enforcers and Cowan resumed beating Anne with renewed vigour with a brick until she lay dead on the floor.

According to the later autopsy report, Anne received a total of 24 blows to the head and body with a blunt object, 14 of which caused a severe fracture to the bulk of the skull.

Their work done, Cowan and Smith recounted to details of the murder to Lily over drinks and while the latter arranged for the disposal of Anne’s body, Cowan and Smith got ready to go to a disco.

Henrietta Cowan and Christine Smith served 8 years of a life sentence for carrying out the murder and Lily Douglas served just four years of a 10 year prison sentence.  All of the people involved were convicted of the role in which they played in Ann Oglby’s murder.

Tagged with: Anne Ogilby, murder, politics, the past, UDA, women
Posted in Uncategorized