Home › Uncategorized › Anyone who chooses cinema as a first date should be slapped with a wet fish.

Anyone who chooses cinema as a first date should be slapped with a wet fish.

Posted on February 22, 2014 by vixenswithconvictions — 3 Comments

Todays blog : Cleo Connolly explains the success, and the pitfalls of online dating.

There’s a certain skepticism about online dating. Myself and some friends are quite skilled at the whole business. One interesting observation I’ve made is the differences of opinion between gay and straight people. Gay people are more open to it – and often better at it.

Most women imagine all the guys are potential serial murderers, like this lovely fella: 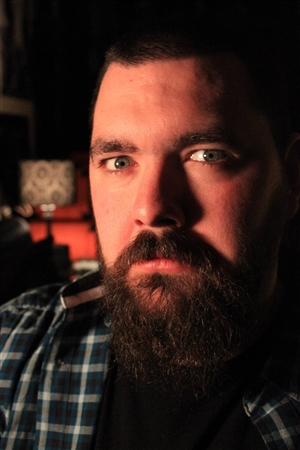 As for what men apparently expect from women on dating sites, well, there have been some interesting social experiments on that.

For many, “online dating” equals “Grindr”. However, just as internet equals more than angry hysterical Tweeters and YouTube comments, online dating is rather varied. And definitely not restricted to gays, or nerds in their mothers’ basements severely lacking social skills. The reason we’re more open to it is simple: more options to meet people. Forget what the Notebook told you, love: your chances of tripping over Mr Right are pretty slim, and we fish from a much smaller pond than you.

We mostly meet potential romances organically in real life. I’ve had two significant relationships, both met through friends. Nevertheless, some of my best dates came from the interwebs. All perfectly lovely, with healthy and I’m sure medically verifiable levels of sanity. One was a speech & language therapist, with whom I shared a passion for Sebastian Faulks. We saw each other for several months. It ended because she was slightly older and was in the frame of mind for settling down, probably with children. The footloose and fancy free twenty four year old me just wasn’t down with that, so we parted ways. Another was a biomedical engineer of some description. She moved to some God forsaken place like Cavan. Possibly Carlow. So, that was that. I still keep regular contact with a girl that I dated in London four years ago, and we catch up whenever I’m there.

Mind you, we’ve had some hilarious disasters. I had the foreign woman who got angry that I wasn’t agreeing to meet her just yet, so I ended up enduring weeks of passive aggressive (and frankly, a bit weird) messages. R. went on a date with a chap who insisted on giving a palm reading, and proceeded to give the most cringeworthy gushing appraisal of him. R. is my gay male mirror image, so imagine how well that New Age claptrap went down. First Place for Most Hilarious Online Dating Fail is tied between an acquaintance who fell for a Nigerian scammer posing as a charity worker in Africa (no, really. She did), or my good friend D’s Titanic dating experience.

D’s gentleman friend was an artist, and asked could he draw him. You’re probably imagining something like this: 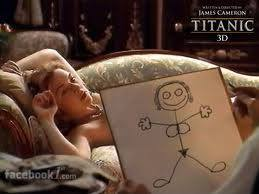 Pretty much. Apart from being a disastrous match anyway, poor D. woke up post coital to find Picasso sitting at the end of the bed, sketching him in all his glory.

“I honestly thought I was dreaming, but no – I woke up and saw the picture after…”

I don’t think any of our adventures top that, to be honest.

Dating is a bit like shopping. It’s lovely wandering into town, leisurely browsing around, seeing what takes our fancy. However, most of us have that “life” thing insisting on taking up most of our time. So when looking for something nowadays, we’ll often go online. That doesn’t mean we never set foot on the high street again. It’s convenient. Yes there are dangers, but honestly? If you’re the kind of person who’ll meet someone after only a handful of messages which all come back to “NE pics” or “got cam”, you’re probably likely to give your number to a less-than-stellar specimen in the pub. Think of it as buying something from an Ebay seller in Hong Kong with about four ratings, all of them red. You should be spending your time online looking up an introductory course to common sense.

Filtering. Gays can remove straight people from searches – and themselves from theirs. Location, religion, kids, pets, you name it. You’ve got kids, or you’re the kind of person who screams at the sight of a little person? You probably don’t want to meet the other. Are you a health nut who thinks smokers should be shot on sight, or a 60-a-day diehard seeking similar? Filter those cretins out of your way! All of this saves awkward first date conversations over dinner/drinks/coffee (anyone who chooses cinema as a first date should be slapped with a wet fish):

“Yes, I’ve a son/daughter/hamster called Johnny/Annalise/Fluffilufficus and they’re my world! I…what’s that? Oh, you have to go, ok. Yes, you text me so.”

While people can hide themselves online, they can also show a lot. It’s also a good way for people who find it difficult to meet others to connect. Singles/divorced/widows, parents or otherwise can find people in similar circumstances. It’s hugely popular with religious people. Jewish singles, Christian singles, Muslim singles, anything.

If you’re the type who can meet your soulmate bumping into them on the street, more power to you. If not, consider your options. You may be pleasantly surprised.

3 comments on “Anyone who chooses cinema as a first date should be slapped with a wet fish.”