I slid into this world on Valentine’s Day 1949. I say slid as I weighed only 5lbs 5ozs and probably my mother didn’t need to push too much to introduce me to the world. However I can’t have looked too healthy as I was baptised the next day 15 February to be on the safe side. I was called Ann Patricia Valerie and I was born under the sign of Aquarius, the water carrier. This was fortunate as a river ran along the side of Rose Cottage, where I was born, and ran out into the nearby Carlingford Lough. Ironic also, as I never learned to swim and have had a lifelong fear of water. 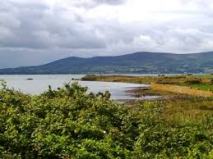 The cottage is still standing but we moved from there when I was two, to a large Victorian terraced house which was rented from the local parish. It looked over a large estate which belonged to the Bowes- Lyon family. It is now Kilbrony Park having been taken over by the local council. Many beautiful Arab horses roamed the huge expanse of meadow. In spring the ground was covered in daffodils. It became our own private playground as we grew up. Many happy hours were spent exploring. We lived near the sea and to find out if the tide was in or out all I had to do was stand at my front door. On summer mornings we would head off to the beach for the day unaccompanied, and we wouldn’t come home until we were hungry. I never went out of my depth and despite all those hours splashing around in the water I still can’t swim.

The house we moved into had been a boarding house run by two elderly sisters and each upstairs room had a bell which had been used to summon the servants from ‘below stairs’. Great fun to play with but a nightmare for Mum down in the the kitchen. They were taken out during renovations which was such a pity. They should have been saved.

My first memory in my new house was of almost flooding us out. Left to my own devices at about aged three after the arrival of a new baby brother I decided to wash myself. I pulled a small chair over to the hand basin in my Mum’s room, put in the plug and turned on both taps. I guess the overflow didn’t work because I can remember my Mum running out of the kitchen as the water flooded through the ceiling. Four boys arrived over the next 11 years and I began to wonder if they were coming from somewhere in my mother’s bedroom. Every time she disappeared into that room with the local midwife another baby appeared. I was 13 when my sister arrived and this was the first time I worked out where babies came from.

I remember at about the age of five getting our first television. It was an ugly looking box, with a tiny screen and watching it was an ordeal. TVs in those days had a vertical hold and a horizontal hold. The horizontal hold to control the continual lilting to the side and the vertical hold to stop the picture continually dropping off the screen. We got used to watching every programme through a snow storm. Reception was terrible and there was only one station. Nevertheless we had TV nights when the neighbours came in to see something special, had something to eat and money was raised for the local church.

We had a happy childhood. We didn’t need x boxes or TV . We built pretend houses, we skipped, roller skated, explored and read comics and attended the matinee in the local cinema on a Saturday afternoon. Saturday was Bunty and Judy for me and the Victor and the Hotspur for the boys. Food was wholesome but unadventurous. Meals out at an hotel were a treat. There was no central heating in most houses in the fifties. Many mornings I woke up to find ice had formed on the bedroom window. When we were sick a coal fire was lit in our bedroom. Getting dressed was an ordeal when trying to do it while still under the blankets. No duvets in those days.

I attended the local school. Outside toilets with half doors were the order of the day. Can you imagine it in the middle of winter? The water in the toilet was frozen, the toilet paper was Izal, the shiny sort. There was central heating in the school. Why were those crates of milk always set beside them? I can still taste that warm milk. Ugh.

My Dad had a Ford or an Austin, not sure which, and many times we travelled with him to Dundalk to smuggle home sugar and butter which were still rationed in the North. We thought it was a great game and I’m sure the customs officer who asked ‘anything to declare’ knew we were sitting on something. On one occasion while on our foray for food, my brother leaned on the back door of the car. There were no safety locks in those days. He obviously flipped the handle and disappeared out the door. Luckily the car wasn’t going to fast. ‘Dad, Dad,’ I shouted, as I looked out the back window to see my brother lying on the road. Seems hysterically funny now but not so then. After the once over in Daisy Hill he was released with a slight concussion.

On a final note bearing in mind what is happening in 2014. The twelfth was held in Rostrevor on one occasion. Shopkeepers of every denomination had their stalls out selling Smyths lemonade and sandwiches for those parading and watching the parade. Our local milkman, an Orangeman, delivered the milk the night before, apologising profusely for the early delivery. My lovely granny who owned a pub in Camlough was visiting. As the parade passed our garden she waved and was acknowledged by a lot of the marchers as many were her customers. I remember thinking she was like the Queen.
The fifties were an innocent time but we were now heading for the sixties. One night a loud explosion shook our house. A bomb had blown up a U.T.A bus in the nearby depot.

( Part Two of this series up tomorrow)