Posted on February 19, 2014 by vixenswithconvictions — 4 Comments

A typed note from one former IRA commander to another may shed light on a mystery surrounding the killing of eight IRA men and one civilian, shot by the SAS in 1987, in what subsequently became known as “The Loughgall Ambush”.

“VWC” has seen the document in question, which is part of a wider archive of material smuggled out of the H Blocks in the late 1990’s.

Dated 6th May 1995, just weeks before an inquest into the killings took place, the note contains the following revelations;

Writing to “Badger”, believed to be a high ranking IRA man in Tyrone at the time, Brian Arthurs, once a former top Provisional – now at odds with the current Sinn Fein strategy, and whose brother Declan was killed at Loughgall;  begins,

“I was over in H5 today and I’d a brilliant conversation with R****!!  We were discussing the Loughgall inquest and here are a few points that I want yourself and ……. (solicitor) to discuss of legal reason (sic), as myself and R**** are thinking of taking the box”

(It should be noted that there is no suggestion that the solicitor mentioned was involved or indeed had knowledge of any actions, and we have therefore decided to omit his name.  We have also omitted the name of the other IRA prisoner and alleged witness to Loughall)

Note the “person already boxed off” line next…

“R****;. will be stating that he was returning from work in Armagh (person already boxed off)…will state that he drove into the middle of the ambush…seen the SAS men standing over the lads and firing rapidly into their bodies.”

“If yourself and ______(solicitor) aren’t happy with this line, then R****’s story could be highlighted through a friendly journalist as the RA man who got away!”

Arthurs, who was in America at the time of the shootings, and who returned home after learning of his brother’s death, was subsequently arrested with John Corr in 1989, when the car he was travelling in was intercepted by the RUC in Ardboe.  A woman, Collette O’Neill was found cowering in the back seat under a coat.  The RUC charged the two men with kidnap, and according to Mark Urban in his book, Big Boys Rules ; O Neill was taken into protective custody, but later returned after allegedly striking a deal with the IRA.  The Crown case against O’Neill’s alleged abductors’ collapsed in December 1989, one month after she returned to Tyrone.  Was O’Neill the Loughgall informer?  And if so, what was the deal which guaranteed she didn’t meet the fate of others who had passed information to the RUC?  In Ed Moloney’s Book, A Secret History of the IRA , he writes that in an interview with him, O’Neill denied being the Loughgall informer, yet admitted that the call for the IRA operation to go ahead had been made from her house.

Speculation had been rife that there was indeed one informer or more who passed information to the RUC regarding the planned attack by the IRA on the town barrack’s, which ultimately led to their deaths.   If O’Neill did pass on any information, was she saved to protect a bigger informer in the ranks of the IRA?

Having studied the next part of Arthurs comm, it appears that Arthurs is stating that O’Neill had admitted her role in warning the RUC of the attack, prior to it taking place.  Arthurs talks of her being given a guarantee that no one would be hurt.  He also mentions a “taped confession”.  Was this part of the deal that was struck?  If O’Neill did pass on information, she would have proved useful to the IRA, as they were intent in proving prior knowledge which led to a “shoot to kill” SAS operation.  Was part of the deal that she would be expected to explain her role in events publicly, if she was called upon?

“As for myself, if Collette O’Neill isn’t willing to help or tell her side of the story.  I’m prepared to give evidence that O’Neill made contact with myself because I was a well known republican in the East Tyrone area, and that my brother was killed at Loughgall (and because I was arrested with her!!)  I’ll also state that O’Neill made a full “taped” confession to myself ,(and hand it over to the court, if it’s still about?) as she couldn’t live with herself after what had happened  Because the Special Branch told her no one would get hurt etc etc.  I’ll state that we were heading to a press conference in Belfast to highlight the use of informers!! when we were stopped by the RUC…’

(The full truth around Loughgall will probably never be exposed, however this note, written by someone who had more knowledge than most into events at that time, is of historical value.  We have decided that it is in the public interest to explore the questions that it will most likely raise for the reader.  Most sources believe that the security services had prior knowledge of the IRA attack weeks before nine men were shot dead by the SAS at Loughgall, which would suggest that Colette O’Neill could not have been the Loughgall informer, although she may have passed on some information – but the question that still needs to be fully answered is – just how did the SAS come to learn of the impending IRA attack?) 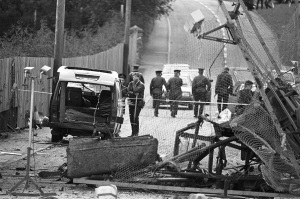 4 comments on “Note from IRA man raises questions on Loughgall.”